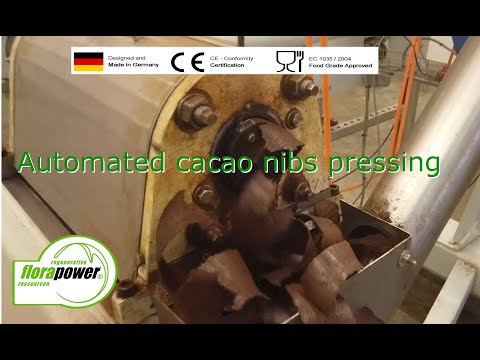 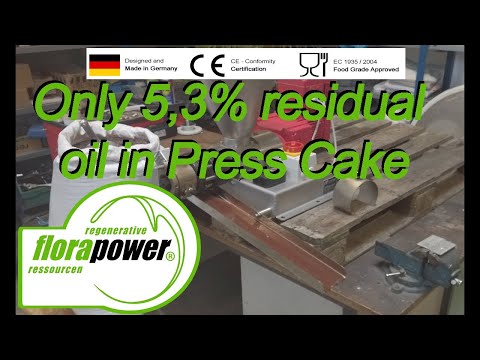 Cocoa butter is understood to mean the fat taken from cocoa nibs or cocoa mass through a mechanical pressing, filtration, or centrifuge.

The initial product, the cocoa beans, are roasted and potentially shelled. Then they are ground into cocoa mass through heated rollers. The resulting warm mass is initially viscous, yet solidifies while cooling and serves as the base material for manufacturing chocolate, cocoa powder, or cocoa butter, among other things. In order to produce the latter, this mass is added to a screw press, in which the fat is separated from the other components. This gives rise to both the press residue (cocoa press cake), which can be further processed into cocoa powder; and the sought-after cocoa butter, which is then filtered or refined, depending upon the intended purpose.

Whole or split cocoa beans are gently pre-warmed to the press temperature and measured out into a mechanical press, thereby producing high quality cocoa butter and cocoa press cakes.

The following graphic shows the entire process from the raw bean to the finished cocoa butter and cocoa powder:

Exemplary system configuration for the processing of cocoa beans

Cocoa butter is a pale yellow to light yellow color.

The aroma is faint yet pleasantly reminiscent of cocoa.

Taste-wise, it is pleasingly mild and has a strong cocoa flavor.

Cocoa butter is composed  largely of triglycerides of various fatty acids, including around 22-30% palmitic acid, approx. 32.37% stearic acid, about 30-37% fatty acid and up to 4% linoleic acid. In addition, there are small amounts of sterols and methylsterols (β-sitosterin, stigmasterin, campesterin) and traces of cholesterol.

Due to its high unsaturated fatty acid content, cocoa butter has a limited shelf life. Under certain storage conditions (cool and protected from light, etc.), however, it can keep for up to 2 years.

Cocoa butter is used in various areas within medicine and pharmacy. It is applied in the manufacture of lozenges, and also of highly adhesive plasters (band-aids). However, owing to several disadvantageous qualities such as inconsistent melting behavior, a lack of volume concentration when cooling, brief shelf life, and a poor water absorbency, it is seldom used in the production of bacilli, vaginal gels, and suppositories, and occasionally also as an ingredient in ointment bases.

In the cosmetic realm, cocoa butter can be found in lip balms and body care products, since it melts at body temperature and leaves skin feeling smooth. According to the Lexikon der pflanzlichen Fette und Öle (lexicon of plant fats and oils), this is why it is especially well-suited for dry and chapped skin, and so also serves as an ingredient in bath additives, lotions and body care creams, lip care products, and in many balms. In anti-wrinkle creams, too, it can also be found, since it softens wrinkles, especially around the eyes and mouth. A further advantage of cocoa butter is that it can be rubbed onto stretch marks to prevent or reduce them. Cocoa butter is important for soaps as well. Here it forms a good, hard, and mild soap when combined with alkalis, yet it can also be used in to create super-rich soap or as a basis oil in luxurious soaps.

Here it is sometimes used in the enfleurage process as a fatty layer which then absorbs the fragrances from the blossoms. These fragrances in turn are drawn out using alcohol and used in perfume manufacture.

In the food industry, cocoa butter is used in the manufacture of nougat and white chocolate, or is added to milk chocolate and melting chocolate. Furthermore, it is processed with cocoa mass into couverture, which serves as a coating for baked goods or pralines.

Testing has shown that cocoa butter is highly effective as a repellent against insect bites.