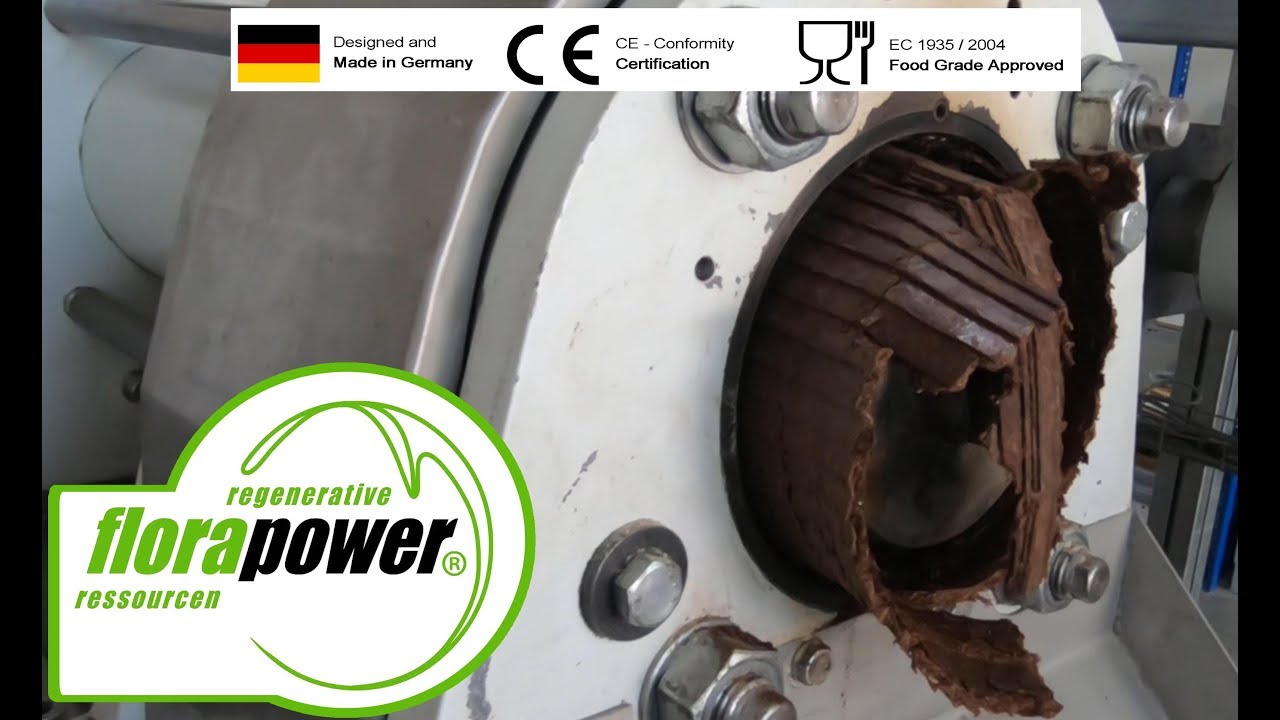 Grape seed oil may be obtained both through a hot-pressing and through chemical extraction and refinement. If oil containing numerous valuable contents (such as vitamin E and lecithin) is desired, then the grape seeds should be cold-pressed. In order to reach the seeds, however, the grapes must first be pressed into pomace, from which the seeds are then separated. The residual water content of the seeds is then reduced to ca. 10% by being heated indirectly. Afterwards, the seeds are pressed with screw presses. Owing to grape seed’s low oil content (ca. 12-16%), and to the fact that conventional presses leave about 10-12% residual oil in the cake, a considerable amount of seeds – about 800 kg. of pomace – for a liter of grape seed oil. For a substantially more efficient pressing of grape seeds, the Florapower Hartkernpresse (hard kernel press) was developed. The residual oil content in the press cake is reduced from 10-12% to a mere 6.3% (see the video: Auspressung der Traubenkerne [Pressing of Grape Seeds]). Pre-warming the seeds before they are pressed results in a higher oil yield. If a more intense flavor is desired, then red grapes should be selected and purchased for the grape seed oil. The oil can nevertheless also be obtained through extraction with gasoline/petrol or through a warm-pressing. The former production method, however, gives the oil an olive green color as well as a burnt and unpleasant taste.

Further information on the processing of grapes and grape seeds, mass diagrams, process steps and an investment overview in our seed specific example solutions.

The smell of cold-pressed oil can be described as odorless to sweet, woody, and aldehydic. Taste-wise, cold-pressed oil is faintly sweetish, even somewhat nutty. On the other hand, warm-pressed oil assumes a neutral yet sometimes burnt and unpleasant taste. Grape seed oil has a solidification point of between -24 and -10°C; a melting point around 10°C; and a boiling point not until about 220°C. The color of cold-pressed grape seed oil ranges from colorless to brown-yellow. If the oil is obtained through a warm-pressing, however, then it is rather greenish. Grape seed oil is composed of a high percentage of essential, unsaturated fatty acids (ca. 71% polyunsaturated fatty acids, particularly omega-6 linoleic acid), around 18% monounsaturated fatty acids (particularly oleic acid), and only ca. 11% saturated fatty acids (particularly palmitic acid and stearic acid); as well as a high amount of vitamin E and the natural antioxidant procyanidin (proanthocyanidin, OPC). In addition, the oil also contains polyphenols, phytosterols, glycerides of ricinoleic acid, lecithin, and resveratrol. Grape seed oil, while it is counted among the most expensive oils, is also among the most precious. Genuine grape seed oil is often described as a delicacy. It has a musty-grapey aroma and can refine a variety of dishes.

If stored in a dark and cool place, its shelf life is 12 months.

Because of its many positive characteristics, such as its easy digestibility and its anti-inflammatory effect, among other things, grape seed oil is readily used in the area of medicine and pharmacy, according to the Lexikon der pflanzlichen Fette und Öle (lexicon of plant fats and oils). For example, it possesses a great antioxidative effect due to its high vitamin E content and the above-mentioned procyanidin. Due to procyanidin’s and vitamin E’s negative effect on free radicals, grape seed oil is currently being considered for use in cancer prevention and therapy. Moreover, the fatty acid composition of grape seed oil is of interest to the medical and pharmaceutical community: the high portion of linoleic acid, which is essential for the human body, stands out among the other fatty acids. This explains several of the oil’s beneficial characteristics. According to the Lexikon der pflanylichen Fette und Öle, it has a cytoprotective and positive influence on the cardiovascular system, and also helps with metabolic disorders. Because of its linoleic acid content, it can also be used to treat skin disorders such as atopic eczema, acne, and psoriasis; and as a linoleic acid replacement for premature babies, since they need an especially high amount of this essential fatty acid for their growth and neurological development. Furthermore, the high linoleic acid content combined with the high portion of phytosterols in grape seed oil can help sink cholesterol and triglyceride levels. Glycerides of ricinoleic acid also occur in grape seed oil. These are a D-12-hydroxyoleic acid. It is well known that oils which release hydrolytic hydroxy acids, are anti-absorbent and hydrating. The polyphenols also occurring in the oil have a particularly beneficial effect on lipid metabolism by reducing serum lipid levels. Lecithin, too, can be found in grape seed oil. This can beneficially influence blood formation, strengthen the nerves, and also improve mental performance, since lecithin is a component of neurons and can help support stimulus transmission (compare also to Heilende Öle by Günter A. Ulmer). Resveratrol, also contained in the oil, lends it further beneficial qualities. Resveratrol acts as an antioxidant and anti-mutagen and hinders the enzyme cyclooxygenase, a catalyst for converting arachidonic acid into proinflammatory substances. In addition, resveratrol can likely counteract the formation of skin tumors.

It is used not only as an antimicrobial substance and an astringent, but also in hair loss treatment. It is also used to strengthen the immune system, stimulate muscle activity and enhance libido, as well as work palliatively for signs of old age.

In this field it is also readily used since it is light and colorless, penetrating, stimulating, and cleaning the skin well without leaving behind an oily film. Other benefits can be found in the Lexikon der pflanzlichen Fette und Öle. Grape seed oil possesses, among other things, regenerative and moisturizing qualities. This oil also contains the above-mentioned procyanidin, which is structurally related with the collagen of connective tissue and helps support tissue elasticity. Recently, uses for the phytosterols in the oil have also been found: they are used in cosmetic preparations as a lipid-barrier for the skin, and are used to protect sensitive skin from UV rays. Further reasons for using grape seed oil in the cosmetic industry are its smoothing, wound-healing, and anti-inflammatory effects. It is especially used on oily skin, combination skin or skin tending toward oiliness; on blemished or dry skin; and on acne. Because it spreads easily and is well tolerated when used with other ingredients, it is used in a variety of ways in cosmetic products. Examples include its use in shampoos; sun protection preparations; hair conditioners and hair styling preparations; cellulite creams; oils for the body, massage, and bathing; and furthermore, as a basis for ointments and as a carrier for essential oils. Additionally, according to Marcus Hartmann’s book Öle kalt gepresst (oils – cold pressed), is works effectively to help treat sores, psoriasis, and other skin irritations.

This oil, because of its health-promoting characteristics and essential fatty acids, is currently emerging as a valuable oil for the kitchen. Its aromatic, slightly savory taste makes it versatile, being used, for example, to season salads and sauces, with cheese, and as an ingredient in mayonnaise and marinades. Moreover, grape seed oil is suitable for grilling and deep-frying, thanks to its high flash point (around 220° C) and its OPCs (oligomeric procyanidins, which belong to the flavonoids that are secondary phytochemicals and act as strong antioxidants). OPCs keep the polyunsaturated fatty acids in the oil bound together, even when exposed to heat. Grape seed extract likewise has beneficial qualities. It is supposed to be able to help improve the blood’s flow characteristics and velocity; have a stabilizing effect on vessels; and be able to support cellular absorption of oxygen. Grape seed extract consists of up to 85%  procyanidin. Within about 20 minutes, flavonoids can be absorbed in the body and even get past the blood-brain barrier. Flavonoids help protect brain cells and preserve memory function, as well as prevent premature aging.