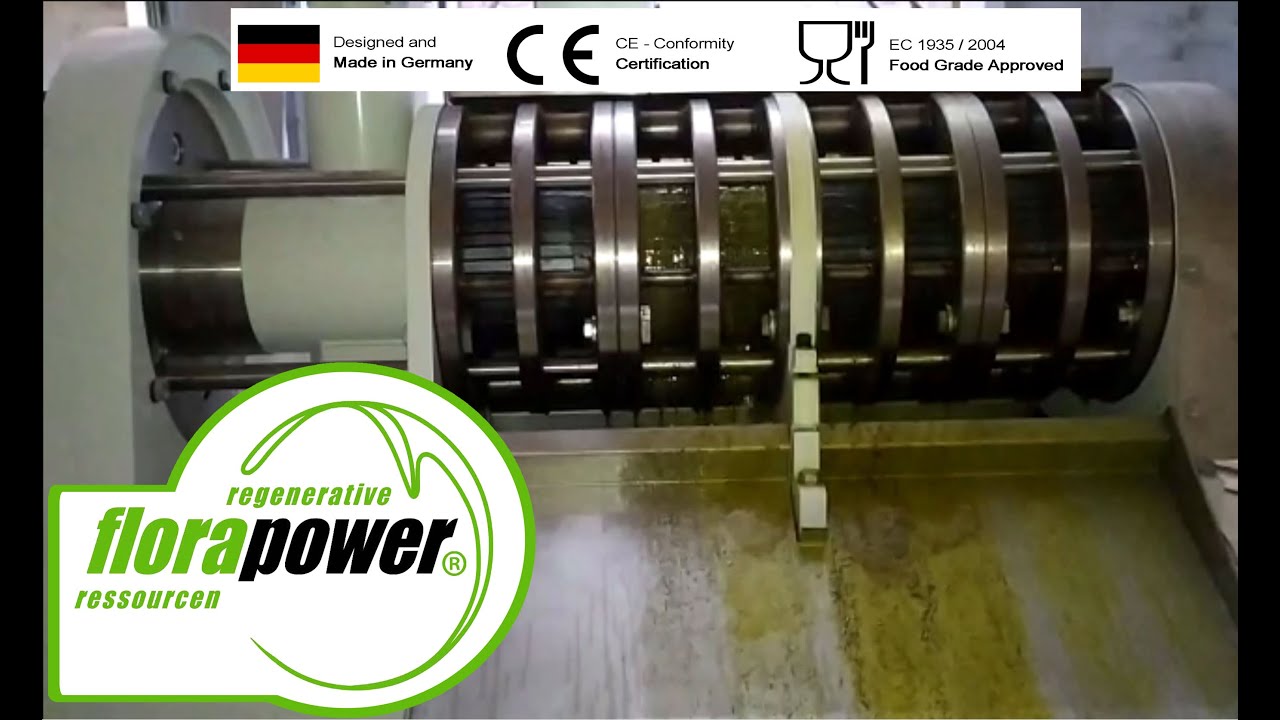 Nowadays, rapeseed oil, next to soybean oil and palm oil, is counted among the most commonly produced plant oils. After the rapeseeds have been thoroughly cleaned, their shells can be broken open in a rolling mill. There are three different methods of obtaining the oil: cold-pressing, hot-pressing, and extraction. It is important to note, however, that each production method has its own advantages and disadvantages. Through a cold-pressing of the seeds, the oil emerges only through the mechanical pressure of the continually rotating screw built into the press; no heat is applied. The friction alone warms the oil temperature to a maximum of 40°C. The resulting oil then undergoes mechanical filtration. A large part of the pure oil can be obtained, therefore, without the use of chemical substances. The advantage of a cold-pressing, since no heat is applied, lies primarily in the preservation of flavor and contents (such as the valuable fatty acids, lecithin, enzymes, vitamins, and mineral contents), as well as the antioxidants, which are supposed to have a positive effect on human health. Furthermore, the oil remains free of added chemicals, no organic solvents having been added, and the oil retains its original characteristic flavor, aroma, and color. However, the oil yield of a cold-pressing is not as great as that of a warm-pressing, which involves a mechanical pressing through a screw press while heat is applied. If only the maximum oil yield possible is desired, with no regard to preserving most of the natural fatty acids, lecithin, enzymes, vitamins, and minerals (for oils with technical purposes, for example), then chemical extraction may be employed. If the cold-pressed oils do not undergo any refining, they can contain residues of plant protection products, heavy metals, and polycyclic hydrocarbons. Furthermore, cold-pressed oils, due to their natural characteristics and the high portion of unsaturated fatty acids and various other substances, have a shorter shelf life than refined oil. Cold-pressed oils are not very thermally stable, making it possible for harmful decomposition substances to form in the presence of heat. For this reason, most cold-pressed oils are not suitable for frying or for deep-frying. Besides rapeseed oil from a cold-pressing (also often called a first pressing), which is especially rich in vitamins because of the gentle processing, there is also rapeseed oil from a warm-pressing (also known as a second pressing). In the latter, the cold-pressed rapeseed oil, already having undergone the “first pressing” and filtration, is additionally treated with pure water vapor at 100°C. It has a longer shelf life in comparison to the cold-pressed, un-steamed oil, and in the process, does not lose its flavor. If the warm-press method is selected to produce the oil, then the seeds are first warmed prior to the mechanical pressing, just before being fed into the press. Heating the seeds and press to the same temperature greatly increases the efficiency of the pressing. A significant advantage of a warm-pressing is a higher oil yield than that of a cold-pressing. Further advantages of this pressing method include the oil being thinner, the proteins coagulating, and the mucous compounds and plant gum being removed for the most part. Heating the oil also causes important substances like magnesium, phosphorus and calcium to be released. However, a warm-pressing also presents a considerable disadvantage, since the valuable vitamins contained in the seeds are lost as the temperature rises; and additionally, during a warm-pressing, substances get into the oil which can negatively impact its color, flavor, and smell. Refined rapeseed oil is commonly used by the Germans as cooking oil. The oil is obtained through an extraction with hexane, which further de-oils the rapeseeds, and then through a refining process. Yet extraction carries both advantages and disadvantages. The advantage is that the oil yield is considerably higher than that of the “mechanical press method”. Disadvantageously, however, many valuable substances in the oil, such as vitamins, are lost. Moreover, the solvent used in the extraction – usually hexane – is very difficult to remove fully from the oil, which (often negatively) alters the flavor and quality of the oil. Following the extraction, there is usually also a refining process which removes the odors, taste, bitterness, and color from the oil. Such a refinement process also means that harmful substances like pesticides, mold residues, and heavy metals can be eliminated. What is more, the refined oil also features better storage capacity, longer shelf life, and resistance to heat since the portion of unsaturated fatty acids within the oil is converted to saturated fatty acids during the refining process. Yet once again, the disadvantage is that many of the valuable flavors and substances such as vitamins, carotenoids and minerals, etc., are also removed. The leftover protein-rich and calorically dense press cake (rapeseed press cake) is an important by-product, being mostly used in the manufacture of animal feed.

Refined rapeseed oil is nearly colorless to yellowish and clear, whereas unrefined rapeseed oil has rather a dark yellow to brownish yellow or greenish color. Likewise, the scent differs between the two types. Refined oil features a touch of citrus and smells fresh, slightly pungent and faintly green. Unrefined oil, on the other hand, smells nutty, faintly fruity-herbaceous, and has a roasted note. The taste is described as mild and pleasantly neutral, and leaves behind a somewhat raspy sensation. Sometimes it is also nutty. The flash point is around 317°C; the melting point, between -2 and -10°C. Rapeseed oil consists of only a small percentage of saturated fatty acids (ca. 6-8%), but in exchange, does have a high percentage of monounsaturated fatty acids (ca. 58-63%). With a moderate polyunsaturated fatty acid content (around 29-36%, the majority of which being omega-3 linolenic acid and omega-6 linoleic acid), and containing vitamins A and E, rapeseed oil is one of the most valuable cooking oils. Cold-pressed oil from good quality seeds, and optimally produced and stored, is especially rich in vitamins and minerals since it undergoes careful processing. It must be kept in mind, however, that the vitamins and minerals in cold-pressed rapeseed oil are almost totally destroyed when heated.

If stored in a cool, dark location with as little temperature fluctuation as possible, and if sealed against water and air, rapeseed oil keeps for up to 12 months. Coated or stainless steel is the best material for a storage container.

Here, rapeseed oil is used in the production of ointments and liniments, as a filling material for soft gelatin capsules, as well as a thin-layer chromatography (TLC) reagent for identifying fatty oils. Furthermore, the oleic acid contained in rapeseed oil can lower cholesterol and also support diverse metabolic functions and the immune system. The vitamin E contained in the oil, along with beta-carotene (provitamin A), effectively protect the cells of the body against free radicals.

The oil finds application here in medicinal ointments and in cosmetic formulations for dry or mature skin, as well as for scaly, cracked skin, and skin with poor circulation.

In industry, it is used both as plant protection and insecticide (harmful insects and their eggs suffocate under the oil film), and as raw material. The latter serves in the production of insect glue, grafting wax, plasters, and leather balm. It is also used in the chemical industry for lacquers and paints, as plasticizers, and as de-foaming agents in detergents.

Specifically in Europe, rapeseed also oil serves in the production of biofuels. The smaller portion of this production serves to process plant-based fuels, while the larger portion is transformed into biodiesel (rapeseed oil methyl ester, or RME) through transesterification. As opposed to conventional fuels, it offers substantial benefits. Biodiesel is biodegradable, sulphur-free, and renewable; conserves raw resources; and is by and large carbon dioxide-neutral (meaning that burning generates only as much carbon dioxide as the plants absorbed in order to form the oil). Further advantages that biodiesel has over diesel fuel is that rapeseed oil and RME possess low ecotoxicity and generate less soot, giving them better emission values. Glycerin arises as a by-product of processing rapeseed oil into biodiesel. This is not only significant in the animal feed industry, but also in the application of fuels as hydrogenated vegetable oil.

Since it has become possible to cultivate rapeseed varieties poor in erucic acid, rapeseed oil taken from these varieties has found use in the kitchen. It is used in cooking, baking, and frying, and due to its low portion of saturated fatty acids and to its high linoleic acid and (omega-3) linoleneic acid content, it is also readily used as edible oil for salads. Because rapeseed oil does not become bitter when combined with egg products and milk products, it is well-suited in the production of marinades and mayonnaise. Beyond this, it also serves in the creation of margarine or baking fat.

The by-product – protein-rich rapeseed cake, rapeseed press cake or rapeseed meal – which is left over from the rapeseed oil production, is largely used in animal feed production. Rapeseed cake can also be burned or used as a substrate in biogas plants to generate heat and electricity.