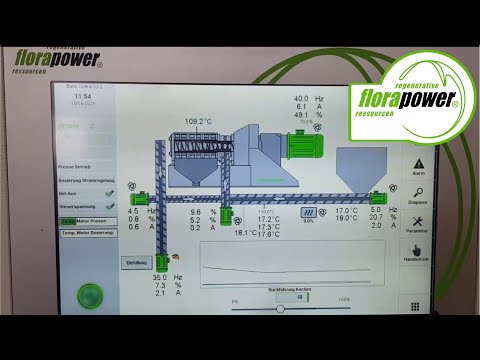 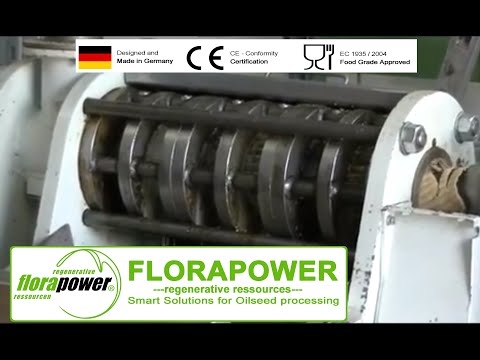 The aromatic sesame oil is taken from mature sesame seeds through cold-pressing or through warm-pressing, extraction, refinement and filtration. The type of production produces two distinct types of sesame oil: oil from unroasted seeds is known as light sesame oil, and oil from roasted seeds is known as dark sesame oil. The unshelled seeds from dried sesame capsules are first cleaned, dried, and then according to the pressing method, are conditioned with steam, which allows the oil to be more easily separated. Following this, the seeds are possibly roasted (should dark oil be desired) and then re-hydrated using water vapor. Oil may only be obtained from the seeds through extraction. Although extraction enables an oil yield of nearly 100%, mechanically pressed oil nevertheless has a higher quality. Finally, the sesame oil is run through all of the filtration levels of an oil mill and subsequently bottled. The press cake, the by-product from the oil production, has a high protein content and is thus commonly used in animal feed.

Sesame oils differ not only in production method, but also in characteristics. Oil from untreated sesame seeds, when cold-pressed, has a clear, light to golden yellow tinge, whereas warm-pressed oil is darker. Refined sesame oil forms a clear, light yellow liquid; sesame oil from roasted seeds features a dark brown color. Cold-pressed sesame oil is nearly odorless, yet does possess a typical sesame note and smells faintly pungent, roasted, and oily. The smell of sesame oil from roasted seeds, however, is typical, intense, and reminiscent of popcorn. Light sesame oil has only a slightly nutty flavor, while the dark oil has a characteristic, strong, nutty and pleasantly roasted flavor. Light sesame oil solidifies around -8 to -6°C and the smoke point is around 177°C. Partially refined oil has a smoke point of around 230°C. The burning point of sesame seed oil from roasted seeds lies approximately at 160°C. Sesame oil is comprised of ca. 40% monounsaturated fatty acids (especially oleic acid, an omega-9), of about 43% double unsaturated fatty acids (primarily linoleic acid, omega 6), of ca. 13.5% saturated fatty acids (especially palmitic acid and stearic acid), and of about 2% of the triple unsaturated α-linolenic acid (and omega-3). Furthermore, it contains accompanying substances such as phenols, phytosterols and lignans; and the cold-pressed and untreated oil is rich in minerals, trace elements, lecithin, and choline.

When stored in a dark, unopened bottle in a cooled location, the shelf life is approximately 12 months. Opened bottles keep only 3 to 6 months.

In the pharmaceutical arena, sesame oil serves as a solvent and carrier for medications, chiefly in the production of oily solutions for injections and injection suspensions for steroids. In the manufacture of bandages and ointments it can also be used in place of the conventional olive oil. Moreover, the sesame oil’s fatty acid composition is supposed to have a positive effect on blood clotting and cardiac activity; and help prevent osteoporosis, lower cholesterol levels, and fortify bones and teeth. Beneficially, this oil also promotes growth and reduces the risk of falling ill with arteriosclerosis. Finally, the lignin sesamin has an immunosuppressant effect. It therefore inhibits in vitro  human peripheral blood lymphocytes, the proliferation of which is induced by concanavalin A. Cold-pressed sesame oil contains a larger amount of lecithin, which is important for the nervous system, the brain, the liver, the gall bladder, and the mucous membrane; and can help reduce elevated levels of blood lipids and cholesterol. What is more, the fatty acids and fat-soluble substances found in the oil have the ability to bind to heavy metal ions and other toxic substances, allowing these to be efficiently eliminated through the excretory organs. In sesame oil there are also lignans, sesamolin, and sesamin. These secondary plant substances from the lignan group act as potent antioxidants, have bactericidal properties and can be used medically against tumors. Supposedly, nasal spray containing sesame oil helps alleviate dry nasal mucous membranes, constipation, and crust formation in about 80% of patients with these symptoms.

In natural medicine, sesame oil is applied for mild forms of constipation; it acts also as a massage oil and helps remove scabs and crusts on the skin. According to Lexikon der pflanzlichen Fette und Öle (lexicon of plant fats and oils), the oil additionally protects the skin from sun rays, having a protection factor of 2. In India, it is considered one of the most important skin care oils and is deemed to be a nerve tonic.  Meanwhile, in East Asia and Southeast Asian, it is used as a liniment for rheumatism and vertigo. Sesame oil also has a variety of uses in Ayurveda, a traditional Indian healing art which has many practitioners in India, Sri Lanka and Nepal. It is applied in oil massages, in Shirodhara (“shiro” – head, “dhara – flow”), and in oil pulling cures; and it serves to strengthen the immune system, support metabolic processes in the body, and separate toxins such as heavy metals and organic solvents from the skin. Moreover, this oil is mixed into mouth care products which are able to pull toxic substances from the mucous membranes, strengthen gums, and reduce cavities and bad breath. Trials also purportedly prove that consumption of sesame oil can lead to lower blood pressure.

Here again, sesame oil is used. It is used as skin care oil in baby skin care, for example, and also processed into cosmetic products such as body oils and massage oils, since it helps against dry and scaly skin. Further benefits of sesame oil are its quick absorption into the skin, and that it promotes skin circulation.

In industrial operations, sesame oil is used not only for producing margarine, but also in the baking industry. What is more, it neither tends to become rancid nor does it exhibit an unpleasant taste or smell. These advantages make it useful in the perfume and cosmetic industry, where it used as a starting product for many perfumed and fragranced oils.

In this arena, sesame oil is often used in insecticides as a carrier or as a synergistic component. Beneficially, such usage allows the pyrethrum percentage in these substances to be halved.

Here again this oil finds frequent application. Thanks to its strong savory flavor, the darker oil taken from roasted seeds is readily used as a seasoning in Asian cuisine. Yet also in Europe its nutty aroma lets it compliment salads, fish or wok dishes, soups, marinades, desserts and even müsli. The light sesame oil, on the other hand, is used rather as an edible oil for cooking, frying, deep frying, and roasting, or even for smoking meat, fish, vegetables and soybean products. In Japan, especially, the co-called oriental sesame oil is used to season tempura. This oil is taken from seeds that have been shelled first and then toasted. In small amounts it is also used to season some Chinese and Korean dishes.