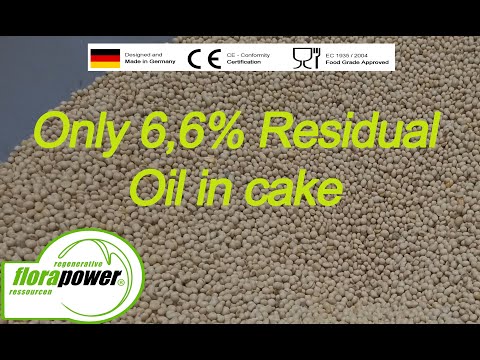 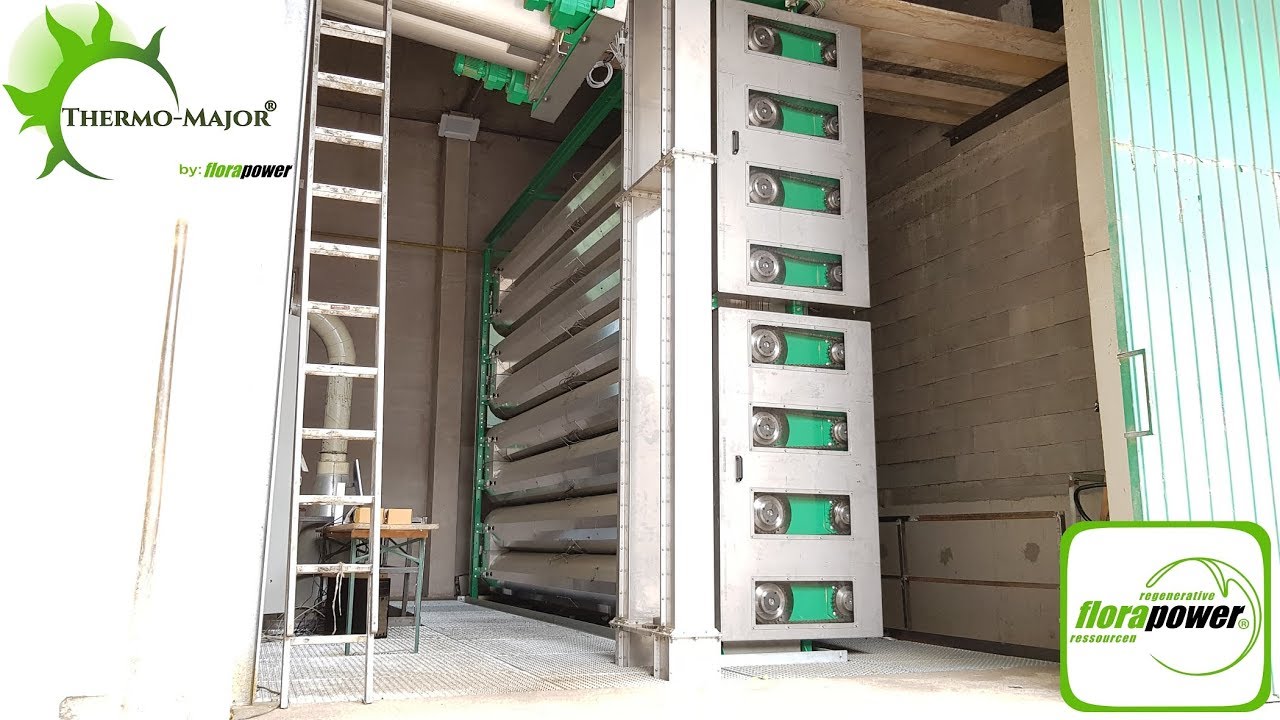 Essentially, there are two ways of processing soybeans. Depending upon the method, the soybeans can be processed either shelled or unshelled.

The first method involves a pure mechanical pressing of the soybeans, whereby the soybeans are appropriately treated beforehand (urease decomposition – check Florapower Thermo-Major). The pressing then follows with a screw press. This method results in the high quality products of soybean oil and soybean press cake. The press cake can be used as feed directly or can serve as the raw material for a feed mill. Crude oil is filtered in batches (coarse filtration, fine filtration, safety filtration) to pure oil.

The second method consists of a solvent extraction of the oil using hexane, whereby multiple products can be obtained.

The third way gives rise to full-fat soy flours, which are nonetheless distinguished through their enzyme activity. Thus, the production of soybean oil and soy meal (soybean press cakes) occur using solvent extraction or through a mechanical pressing of the soybeans. While extraction does reduce or completely destroy important substances (for example, the minerals), its advantage lies in a greater oil yield. Processing soybeans with a screw press, however, has the advantage of being able to process even small amounts of soybeans. Soybean oil obtained through extraction as well as through pressing can undergo a multi-step refinement process. The refinement process strongly influences the composition of the oil: the free fatty acids and phosphatides are split off and the proportion of plant sterols, tocopherols, and trace elements contained in the oil decreases. The first step of processing is the “de-gumming”, or the separation of phospholipids, in order to make the crude oil fit for transport and storage. To this end, the crude oil is mixed with about 2-5% water and acid (usually phosphoric acid), whereby the phosphatides accumulate on the bordering layer between water and oil, and are able to be separated off using a centrifugal separator.

Afterward, the phosphatides are dried in a vacuum and then bleached. The resulting product has a honey-like viscosity and is comprised of about 50% oil and 50% phospholipids. Next, the phospholipid fraction is released from the oil using a whole series of solvent extractions. This produces oil-free phospholipids in the form of solids, which are called soy lecithins. Due to their activity on the border layer between the apolar fat phase and the hydrophilic protein phase, the lecithins are chiefly used as emulsifiers.

The second step involves refining the de-gummed soybean oil. There are two different ways to achieve this, each differing in their method of removing the free fatty acids, a method which takes place either through “acidic” or “alkaline” saponification. Generally, however, an alkaline saponification is used for soybean oil. This involves a hydrolytic splitting of the oil into glycerin and higher fatty acids, which precipitate as alkaline salts (the “soaps”). This method of saponification also splits off the final remnants of the phospholipids. Through partial pigment destruction or absorption in the heavy phase, a certain whitening effect usually occurs at this stage in processing. Then, with the aid of a centrifuge, the resulting soap stock (which can be used during soap production) is separated from the neutralized oil. The oil is then “washed” to remove all the traces of soap from the oil, and “bleached” to remove the pigment and chlorophyll. The final step in processing is deodorizing the crude oil. Here, undesired odorants are eliminated using a water distillation (“stripping”) in a high vacuum at temperatures of approx. 250° C. Finally, the refined oil is cooled and citric acid is added, in order to prevent an oxidative rearrangement reaction. The oil extraction described above produces soy meal.

This, along with the shells, represents about 80% of the soybean mass and possesses a very high protein content of about 44% (even higher is that which is produced through the extraction of shelled soybeans), making it readily used in production of soy foods or as animal feed. Nevertheless, the soy meal also contains anti-nutritive substances (such as the above-mentioned protein inhibitor and the enzyme urease, among others). Exploiting the heat sensitivity of the urease enzyme and protein inhibitor during industrial production of soy foods and animal feed, therefore, by treating the products with heat (so-called toasting) inactivates these anti-nutritive substances. The urease content is also dramatically reduced or even fully eliminated. Likewise the soy press cake, which emerges during soybean oil prodution, is treated via heating processes before it undergoes further processing into protein-rich animal feed; such heating successfully inactivates the harmful anti-nutritive contents (especially trypsin inhibitors, lecithins, and phytates).

The heat should not be too high, however, otherwise it will too drastically reduce the soybean’s protein content. The degree of effectiveness of such an inactivation requires first determining the residual activity of the urease enzyme, since the protein inhibitor is difficult to establish. In order to be able to determine the heat treatment’s (toasting’s) impact, the urease activity (in commercial soy products like soy flour or tofu, for example) or the protein’s solubility is established under specific conditions (Nitrogen Solubility Index, NSI, or Protein Dispersibility Index, PDI).

The optimal degree of effectiveness depends on the requirements of the end product, meaning that soy meal for poultry farming, for example, must be more intensely toasted than soy meal for cattle farming. Soybean meal from shelled soybeans, in flour form, can also be used in human food. Soy concentrate, moreover, can be obtained from de-fatted soy meal or de-fatted soy flakes, while textured soy protein is taken from soy meal or from soy concentrates, the soy protein isolates.

The color of soybean oil depends on the production method. Thus oil obtained through pressing is light yellow to yellow, while oil obtained through extraction features a brownish yellow tinge. Soybean oil possesses a pungent, greenish-musty and nutty scent that is described as pleasant. The taste is considered mild and also pleasant. The flashpoint is around 350°C; the melting point, around -16 to -8°C. Soybean oil is comprised of around 14% saturated fatty acids (especially palmitic and stearic acids), about 24% monounsaturated fatty acids (especially oleic acid), and ca. 62% polyunsaturated fatty acids (especially linoleic and linolenic acids). This high omega-3 and omega-6 content, especially in cold-pressed soybean oil, has a beneficial effect on nutrition. Additionally, the oil contains tocopherols (4 forms of vitamin E), phytosterols, and a relatively high lecithin content of about 1.5-3.5%. Unopened and stored in a cool, dark place, the oil has a shelf life of about 9 months.

According to the Lexikon der pflanzlichen Fette und Öle (lexicon of plant fats and oils), soybean oil has various uses in the realm of medicine and pharmacy. Natural soybean oil possesses a high lecithin content (ca. 3%). Lecithin serves as a pharmaceutical excipient in the manufacture of parenteral nutrient solutions with lipids; can be found in preparations as a dietary supplement and roborant; and has an important role as a surfactant for premature babies with Respiratory Distress Syndrome (RDS). Due to its high percentage of unsaturated fatty acids, especially omega-3 linolenic acid, soybean oil is attributed with reducing the risk of heart disease. Since the oil also has a substantial amount of α-linoleic acid and contains sterols, it has a beneficial effect on the risk of arteriosclerosis, as well as on triglyceride and cholesterol levels. Furthermore, the isoflavones found in soybean oil, the so-called phytoestrogens, feature a protective function against cancer of the colon, lungs, stomach, and prostate; and are supposed to prevent hormone-dependent cancer development, e.g. protect against breast cancer.

Technical and industrial use

The paint industry utilizes soybean oil as a quick-drying oil, especially in the production of dyes, varnishes, printing inks, paints, and putty. Soybean oil is also used in the production of biodiesel.Moreover, the fatty acids contained in soybean oil find application in cosmetics and personal care products; serve as a basis for bath oils and creams; and used in essential oils and geranium oils, in order to lengthen their brief duration.

In nutrition, soybean oil is considered one of the most important and most frequently used plant oils. It serves not only as salad oil, but can also be used as baking fat. What is more, it is used in the manufacture of margarine and mayonnaise and is also contained in numerous convenience foods as part of the plant oils. It also serves to help improve the volume of baked goods and delay staleness; as well as improve both the flow property of chocolate and the dissolvability of instant products.

In folk medicine, soybean oil is used for treating various regions of the body: stomach and intestines, heart and circulatory system, and the immune system. Yet soybeans are not pressed into oil solely for the purposes listed above, but rather, most especially to obtain soy press cake and soy extraction  meal, which arise as by-products during the pressing or extraction. These can be processed into high quality, protein-rich feed and into various other soy protein products (for example, soy flour, foods containing soy, soy protein isolates, soy concentrates, textured soy protein, etc.). Here, the less oil that remains in the press cake or soy meal after pressing, the higher the protein content, and the better the press cake or soy meal is.