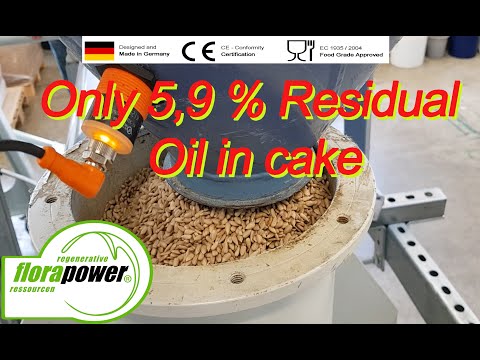 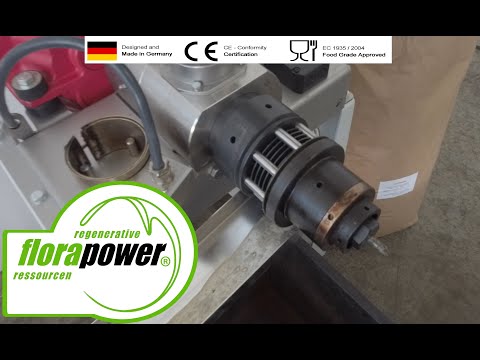 For the production of the oil, the mature sunflower seeds are first fully or partially shelled (aided by a centrifugal peeler), pre-warmed and finally fed into a mechanical press. The cold- or hot-pressing process can follow in one or two stages. The screw press is suitable for a single-stage pressing. For a two-stage pressing, we recommend a combination of a Florapower pre-press and a Florapower universal press. The degree of squeezing power with a single-stage pressing is somewhat lower than with a two-stage oil pressing.   A further method of sunflower seed oil production is extraction. If necessary, the oil is then refined in order to remove unwanted components.

Oil obtained through cold pressing is light yellow, whereas warm-pressed oil has a reddish yellow hue. Extracted and refined oil is light yellow and clear. The warm-pressed sunflower seed oil and the cold-pressed alike are nearly odorless. They have a light oily, nutty, and woody aroma with toasted notes or hints of greens. Sunflower seed oil has a pleasant, mild taste. The melting point is -16 to -18° C; the flash point, around 316°. Cold-pressed sunflower seed oil consists largely of polyunsaturated fatty acids (around 65-70%) and additionally contains lecithin, which is important for metabolism; as well as tocopherols (Vitamin E), Vitamin A, proteins, globulin, palmitic acid, stearic acid, arachidic acid, lignoceric acid, and arginine.

When stored in a cool and dark location, sunflower seed oil has a shelf life of 9 – 12 months (maximum) following production.

In the pharmaceutical industry, sunflower seed oil is used as a filling material in soft gelatin capsules. In addition, it is used in the production of creams and ointments, and can replace olive oil and peanut oil in medical products. According to the book Oils – Naturally Cold-Pressed by Marcus Hartmann, sunflower seed oil is supposed to be easily digestible and help in reducing high cholesterol.

Industrially, sunflower seed oil is applied in oil paints and artists’ colors, and in the manufacture of soaps and lacquers. Additionally, it can be used as a preservative agent in textile making and in leather processing. Warm-pressed oil can only be used for industrial purposes. Pure sunflower seed oil can also be used as biofuel and as vegetable oil fuel. Its fuel qualities, however, are as yet scarcely researched. In contrast, sunflower seed oil today is often used in the production of biodiesel. Refined oil is also found in lubricants and plasticizers.

Sunflower seed oil is considered valuable cooking oil because of its versatility. It is used in cooking, can be used as a dietary product, and is additionally well suited for use in baby food products and in the production of mayonnaise, salad dressings, and margarine. However, only sunflower seed oil from “high oleic” types should be heated to high temperatures, since carcinogenic substances (radicals) can form in all the other types of sunflower seed oil. The latter types should only be used in cold dishes. They are only able to be heated to a maximum of 120° C, yet do contain a very high proportion of omega-6 fatty acids, a marginal proportion of saturated fatty acids, and much Vitamin E. In contrast, the so-called “HO sunflower seed oil” (high oleic) contains a much higher percentage of unsaturated fatty acids as compared to conventional sunflower seed oils, and can handle temperatures up to 250°C.

Traditionally, sunflower seed oil is supposed to be used internally to ease constipation; and externally, for badly healing wounds, skin lesions, and rheumatism.

Lastly, the residues on the press, such as the defatted flour, have a wide range of applications. They can serve as livestock feed.