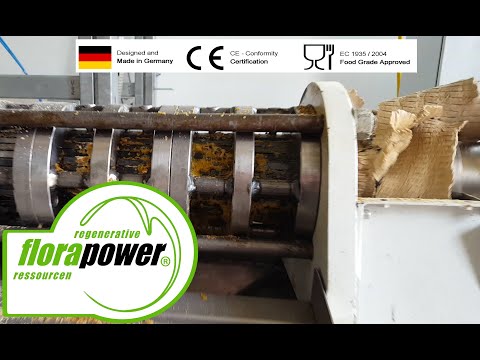 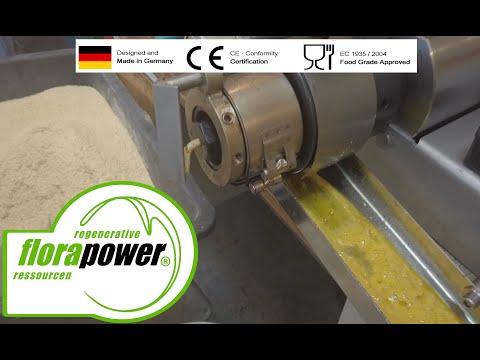 Wheat germ oil usually occurs as a by-product in wheat flour production. Today, modern milling processes for obtaining flour and bran mechanically separate the germ buds, relatively fatty parts of the wheat grains. For wheat germ oil production, a cold-pressing with a screw press is used, or also an extraction with solvents. Afterward the oil may possibly undergo refinement. Furthermore, the wheat germ oil can also be obtained using a solvent-free extraction with supercritical carbon dioxide, which advantageously removes the need for refinement.

Raw wheat germ oil has a golden yellow to brown hue. Refined oil, on the other hand, is yellowish. The oil smells like grains and dried herbs and contains weak notes of pepper. The taste of the oil is a typical, distinct wheat taste. The smoke point is about 90°C. Wheat germ oil is composed of about 60% polyunsaturated fatty acids, ca. 88% of which is the omega-6 fatty acid linoleic acid. Additionally the oil contains about 18% oleic acid (a monounsaturated fatty acid) and ca. 18% saturated fatty acids (especially palmitic acid). There are is also ca. 200-300 mg. of vitamin E per 100 grams of oil, giving wheat germ oil the highest total vitamin E content of any other oil. This vitamin E is composed chiefly of alpha-tocopherol. Moreover, wheat germ oil has only a limited oxygen stability and can be heated only to about 90°C.

Normal wheat germ oil, when stored in a cool, dark location has a shelf life of 6 months. If the oil has been obtained through extraction, then it has a longer shelf life.

Many natural vitamin E preparations are made from wheat germ oil and, due to the natural active ingredients it contains, this oil is also commonly used in the production of ointments and powders. Thanks to its high vitamin E content, wheat germ oil is readily taken orally (against free radicals) and is also considered a dietetic oil. In addition, the vitamin E contained in the oil is important for the gonads to function normally and for a normal pregnancy. According to Günter A. Ulmer’s book Heilende Öle (healing oils), further positive characteristics of wheat germ oil are that it acts as an anti-inflammatory and protects the cells from premature aging and deterioration. What is more, the vitamin E within the oil can improve the blood flow and oxygen supply of the organs, muscles, and tissues; lead to higher performance and vitality; and guard the heart and circulatory system from damage caused by overstrain. Vitamin E can also supposedly slow premature aging. Finally, according to the Lexikon der pflanzlichen Fette und Öle (lexicon of plant fats and oils), a reduction in cholesterol levels in the plasma and liver can be observed in animals.

Also in the cosmetic area, wheat germ oil has a variety of applications and features several very beneficial characteristics, according to the Lexikon der pflanzlichen Fette und Öle. For example, it can be found in skincare and haircare products. Because of the high percentage of omega-6 fatty acids in the oil, it is especially well suited for dry and chapped skin. Wheat germ oil is considered fine skincare oil since it seemingly prevents signs of skin aging; moisturizes the skin; and regulates the metabolism. Moreover, it can stimulate cell regeneration in mature and dry skin, which tends to form fine wrinkles. The vitamin E contained in the oil keeps the connective tissue healthy and makes the skin smooth and elastic. In addition, it can also be found in haircare products, where it serves as preventative hair care, to keep the hair healthy and stimulate circulation in the scalp. In the cosmetic industry, wheat germ oil is also used, for example, in the production of skin oils, powder, soaps, face packs, and other nurturing cosmetics. Besides this, it is well suited as a basis for essential oils. Wheat germ oil and products containing wheat germ oil also offer benefits during pregnancy. It is well known that preparations containing vitamin E, when applied percutaneously, improve blood circulation in the peripheral vessels. For this reason, persons whose skin has poor circulation are advised to apply these products. Wheat germ oil contains a high percentage of vitamin E. This makes it well suited to be mixed into products for perineal massages for pregnant women, so that the vitamin E in the oil improves the tissue’s circulation and elasticity. Likewise this oil helps strengthen and firm up the connective tissues. Interestingly, the shelf life of homemade creams can be extended if wheat germ oil is mixed into them.

Cold-pressed wheat germ oil, thanks to its high vitamin E content, can contribute to a healthy diet. Due to the high amount of tocopherol, it can also be used as a dietetic oil. Primarily this oil is used to obtain natural vitamin E and unsaturated fatty acids.