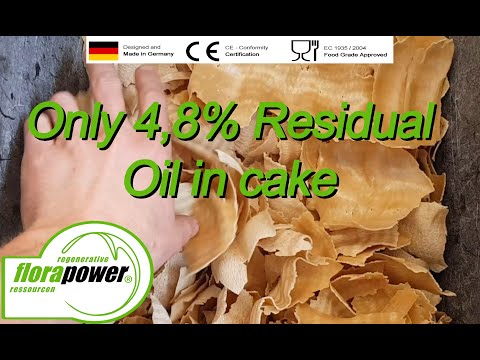 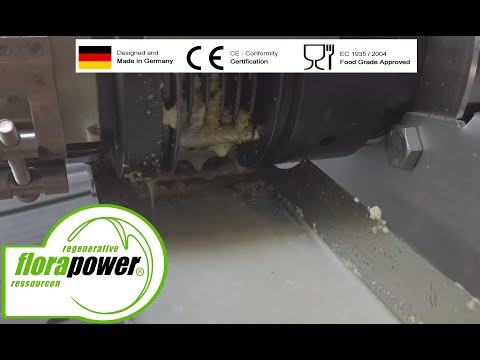 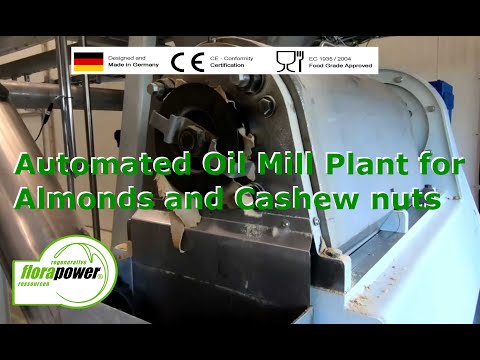 Almond oil can be taken from both the bitter and the sweet almond varieties. Oil is obtained usually through a cold-pressing process; however, sweet almonds can also be pressed warm. First, the almonds are cleaned of impurities and loosed from their shells. The pre-cleaned seed is then gently warmed to the press temperature and subsequently fed into a screw press. The resulting products, almond oil and almond press cakes, then undergo immediate further processing. The press cakes are crushed and cooled before being sent for further processing or into storage. The oil is generally turned into pure oil, after undergoing several stages of purification (rough filtration, fine filtration, safety filtration). Alternatively, after being pressed, the oil is left standing for several days, which allows the mucilaginous components to settle and then, with the aid of filter presses, be removed. After being cold-pressed, the oil can be used either refined or untreated. Essential almond oil, however, is only taken from bitter almonds, which is also why it is called bitter almond oil.

Good almond oil should be clear, slightly yellowish, runny and nearly odorless. It can, however, give off a mildly nutty, faint vanilla note. The flavor is reminiscent of almonds and is mild and oily. The oil also usually has a mildly nutty, slightly sweet aroma. Almond oil can be heated to a temperature of 220° C. The solidification point lies in the range of -10 to -20°C. Almond oil is comprised of around 78% oleic acid, up to around 17% linoleic acid, and up to 5% palmitic acid. Besides containing a small amount of myristic acid, almond oil also contains potassium, phosphorus, magnesium, sulphur, iron, sodium, glutamine, sterols and also vitamins A, B and E. The advantage of this oil is that it features a high content of water soluble vitamins and secondary plant substances, as well as a small percentage of saturated fatty acids. Beyond this, it is usually also well-tolerated by many nut allergy sufferers.

The oil should be stored in a cool and dark location in order to avoid turning rancid. Under such conditions, its shelf life can last around 12 months.

Almond oil can serve as a solvent and dispersing agent for oleaginous injections. These help in the administration of lipophilic medications that cannot be taken orally. Because of its ability to alleviate irritation, the oil can also be used in oleaginous eye drops. If it is warmed and administered in drops into the ear, it can also help alleviate ear aches.

According to the Lexikon der pflanzlichen Fette und Öle (lexicon of plant fats and oils), almond oil has a variety of applications in this arena. It helps, for example, with bronchial congestion, lung inflammations, lack of appetite, upset stomach, boils, skin irritation, and also with diaper dermatitis and bedsores. Additionally, it is also supposed to help with stomach aches and colic in children, as well as to fight against hair loss and dandruff. It can further be used topically to help with bladder or kidney ailments.

In cosmetics, almond oil has a wide range of applications, often being described as one of the most precious oils in skincare as well as an “all-round cosmetic”. It serves, for example, in the production of skin oils, massage oils, oil baths, ointments, lip balms, baby care products, facial and oil packs, and also for hair care preparations. According to the Lexikon der pflanzlichen Öle und Fette, almond oil is an ideal oil for skin because it not only smells pleasant but also because it is absorbed quickly into the skin, moisturizing it thoroughly. It is especially calms and soothes rough, scaly, and dry skin. Thus, almond oil is used in cosmetics to alleviate irritation and pain, to promote circulation, and to moisturize, yet it also serves as a sheer, natural UV filter.

Here, almond oil is used as a lubricant for fine mechanical systems, such clocks, instruments, and weapons.

In this area, almond oil is largely used in the production of marzipan.

The oil can be used both as a salad oil and – owing to its almond aroma – for sweet dishes.