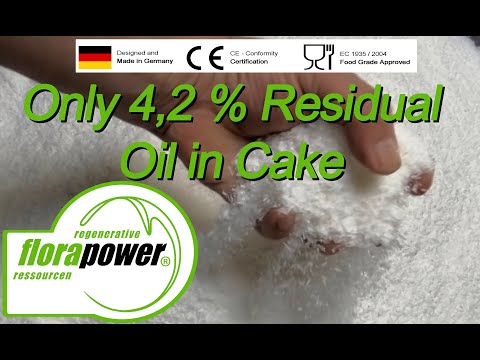 Due to its high percentage of saturated fatty acids (approx. 90%), coconut oil is solid at room temperature, which is why it is also called coconut fat. Nevertheless, since it has a low melting point, it becomes liquid around 23°C.

Coconut oil is taken from the copra, the endosperm of the coconut. This is crushed, dried and then pressed in oil mills using a mechanical pressing.

If the oil is to be used as a cooking fat, then it undergoes refinement and deodorization after production.

Coconut oil has a white to yellowish color. It smells waxy, faintly oily, fresh and mild with a light note of coconut. It is even often somewhat rancid-smelling. Concerning taste, the oil tastes like coconut. Coconut oil at room temperature is a solid plant oil whose melting point lies around 18 to 25°C, whose smoke point is approx. 194°C and whose flash point lies around 288°C.

For the most part, the composition of this oil consists of saturated fatty acids such as caprylic, lauric, capric, palmitic, stearic, and myristic acid. Furthermore, it contains the simple unsaturated oleic acid and also traces of calcium, potassium, sodium, copper, iron, phosphorus, amino acids, Vitamin E, and lactones. If coconut is stored in a cool location, it has a shelf life of 1 to 2 years, due to its high percentage of saturated fatty acids.

In the pharmaceutical and medical industries, coconut oil is used in the manufacture of ointments and creams and additionally serves as a substitute for the (more) expensive cocoa butter. Furthermore, the middle- chain triglycerides contained in the oil are well-suited to dissolve or suspend orally applied medicines, which are otherwise unstable in water.

Also in this area coconut oil is used –although it does not deeply penetrate the skin – since it has a moisturizing and cooling effect. Thus, it is commonly used as an ingredient in products such as hair pomades and hair care products, sun protection creams, and after-sun products, bath and massage oils, and in creams and soaps.

Coconut oil also has many applications in this field, being used, because of its cooling effect, in the confectionary industry in the production of ice cream, wafer fillings and coatings. Beyond this, it is also used in the manufacture of vegetable margarine and chocolate. The fatty acids produced during refinement also find use in the production of artificial resins, insecticides and medications. Furthermore, coconut oil can be further processed into higher, saturated, and unsaturated fatty alcohols, fatty alcohol sulphates, and other alcohol derivatives. It is suitable as well to soap and candle production. Its high lauric acid content, meanwhile, makes coconut oil also an important initial product for surfactants. Finally, the caprylic acid methyl ester and octyl alcohol contained in the oil can be used to make octanal, which is used as an ingredient in soaps and candles.

Another positive effect of coconut oil is that it lends itself to transesterification and thus is able to be used as an admixture to diesel fuel. This is of special importance, considering that crude oil and other fossil energy sources are shrinking. In other regions such as the Philippines, this oil, in the form of methyl ester, is already being produced in large quantities and serve there as biofuel (especially biodiesel).

In the kitchen, coconut fat can be used as a normal cooking fat for frying, baking or deep frying, since even though it is solid at room temperature, its low melting point nevertheless means that is quickly liquefies when exposed to heat.  While melting, it absorbs a significant heat of fusion, which in the mouth generates a perceptible cooling effect, and is used for this reason in the manufacture of ice chocolate. In the confectionary industry, the grated copra is also used. In Germany, a pure coconut fat containing hydrogenated and partially hydrogenated fats is available under the name Palmin. Additionally there is also Palmin soft, which contains no hydrogenated fats; yet in contrast to Palmin, it consists of a mixture of sunflower seed oil, palm kernel oil, and palm oil.

Virgin coconut oil is especially desirable for cold dishes. Virgin oils are obtained through a gentle pressing of the oil fruits in a cold press process. For this purpose, chopped copra is gently fed into a press without the seed temperature being raised. Virgin oils are characterized by retaining the taste of the fruit or seed from which they are pressed. Most of the have a low smoke point and thus should not be overheated, since doing so causes the oil or fat to break down, form harmful substances, and lose valuable substances. In comparison to refined oils, virgin oils generally contain more valuable substances, such as vitamins, minerals, secondary plant substances, and flavorings, among other things; their shelf lives, however, are often shorter than those of refined oils. Coconut fat press cakes, which are created as a by-product during the oil production, serve as an important source of sugar, protein, and minerals for animal feed production.